If you don’t know who John and Hank Green are, well, you should. On youtube, they’re known as the Vlogbrothers (http://www.youtube.com/user/vlogbrothers) and have been making fun, interesting, silly, and profound videos since ancient times. Which, in youtube terms, is like 3 or 4 years ago.  Anyway, within the last year they started a series called “Thoughts from Places”, which is exactly what it sounds like. Go somewhere, bring along a video camera, and record your impressions. To see some of them, hit the link above and search for ‘thoughts from places vlogbrothers’. I wanted to do my own version, but I’m at work and didn’t have a video camera with me, so here’s my textual attempt…

If you were me – and let’s both  be thankful that you’re not – you would often get sick of staring at your computer screen, and your posted post-its, and your to-do lists and seek momentary mental escape. You’d turn away from that wall of stuff, of have-to’s and commitments, and rotate to your 7 o’clock (Ok, fine! More like 7:30 Let’s not quibble over the details.) and look out the window. This is what you’d see.

Right outside the window is a tree. Magnolia, I think. Or perhaps something particularly magnolia-esque. What do I know? I’m no botanist. The tree stands in the courtyard between the building where my desk is and the other building that makes up our museum, an 1856 Italianate house where we keep all the exhibits. Last year I’d see a lot of squirrels in the branches and they’d sometimes hop onto the window ledge and look into the office as if they wished they could come inside with us. Be careful what you wish for, boys. Here there be responsibilities. This year, though, has been fairly squirrel-lite. I have seen a bright red cardinal a few times. One day he spent a good five minutes tapping away at the windowpane. I’m pretty sure that’s supposed to be a bad omen.

Just past the courtyard is Halsted Street, which Google Maps tells me runs from Grace Street in Wrigleyville for 35 or so miles all the way south to Chicago Heights. On the way there, it passes 196th Street. I didn’t even know the street numbers went that high. In the museum, we have a video from the 1930’s (I think) that shows images of the entire route from south to north. Today it would all be an urban gumbo of residential, commercial, and industrial. Back then there was that, sure, but there was also rural. Like, horse-pulled plow rural. Amazing how much and how fast our cities grow.

Across Halsted from work is the gym. This is one of the “benefits” of working at a large university. The gym is right there! And it’s cheap! And they’ll take my membership fee right out of my paycheck! Pre-tax! But I think we’re in an abusive relationship. And I’m definitely the bad guy. The gym wants nothing but the best for me and usually gives me all it can. And what do I do? I ignore it, curse at it, and often tell it that I wish it didn’t exist. All it wants is love and all I offer is insult. Thirty years from now, the gym will need some serious therapy.

The gym abuts good old Interstate 90/94 which might be called “The Dan Ryan” or “The Edens”. Maybe both? Why can’t Chicago just call its freeways by their number like the rest of the free world? All I know is that that particular stretch of road is never not traffic jammed, I drive on it as little as possible, and I hate it.

But that’s why bridges were invented, because just across that horrible stretch of road rises the great city of Chicago. I use the term “great” here to indicate size, not any kind of emotional connection. Although, that may be coming. I’ve lived here for a year and a half and, I’ll confess, there was a time I was convinced I would never be a fan. But I thought that about Vermont only to wake up one morning and realize that I had fallen in love – hard – for that previously cursed place. Could the same happen here? Maybe it’s happening right now, just at geologically slow speeds. All I know is that I’ll find myself coming around the corner on one of the CTA lines and get a cityscape view I haven’t seen before, or I’ll be walking around downtown and notice some hidden and long forgotten architectural detail, or be running errands and realize what a great variety of various ethnic non-pretentious holes-in-the-wall there are, and I’ll have moments of “Ok, yeah, I get it.” Dominating the view from my office window is, of course, the Sears Tower. And yes, I know it has a different name. Tell you what; I’ll start calling it the Willis Tower just as soon as whatever the Willis Company is does something as awesome as selling khakis, lawnmowers, video games, and Craftsman tools all under one roof. At the top of the tower is the observation level which now features plexiglass pods so you can stand out away from the side of the building and look down 103 floors to the street. I think about that, and I remember being up there, looking out at three states and 10 million people and feeling very small.

Of course, just past the buildings great and small that make up the city is the lake. Lake Michigan. No, I can’t see it from my desk, but I know it’s there. I can feel it. The lake is that unbroken connection between here and there. Yeah, I know we have roads, and trains, and airplanes. But the lake, and the rivers, and the ocean… they were there before all that and they will be there after. The lake makes me feel connected to those that I am far from. Fievel may have found comfort in the pale moonlight, but I find comfort in knowing that the same water I’m next to touches, in some fashion, the waters of my loved ones.

And the window itself? The window is on the second floor of a building built in 1907 as the dining hall for a group of social reformers. They tried to make life better for those less fortunate. Today, we tell their stories and try to work within the spirit of what was started here so many years ago. The window is a reminder that the real work isn’t at my desk at all, but out there. Telling stories, creating context, fostering connections. 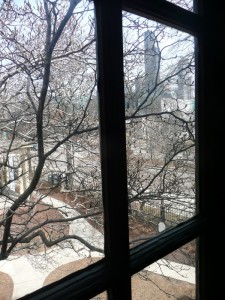 I was listening to the always-entertaining Nerdist podcast on the way in to work this morning. (Quick aside: if you listen to podcasts and like comedy and/or nerdy things, you owe it to yourself to check out the Nerdist podcast. It’s fantastic.  Clickity for more information.)

Anywho, the guest was Sarah Silverman, whose comedy I’ve always enjoyed but who I’ve always sort of been afraid of because you get that feeling that she’s razor sharp and than nothing is sacred. But hearing her  talk as a normal person was fairly endearing and I came away liking her a lot more.

One thing she said stuck with me. She mentions that while she’s a naturally happy person, she actively tries to find something to be happy about each day. It was one of those moments where you realize you might not know as much as you assumed you did.

I guess I sort of thought of happiness as a one or a zero. You either were or weren’t. Outside events would be the cause, of course, but happiness or sadness was an unchangeable, force of nature reaction.

But now I don’t know if that’s the case. I certainly spend a good amount of time being unhappy. Not necessarily sad by any definition, but certainly apprehensive, tense, aggrivated, etc. Not happy.

But here’s the thing: I can choose to be. I think that how you react to life is largely up to you. It’s not easy and I don’t think it’s an all of a sudden *poof*-I’m-happy moment. But I can put one emotional step in front of the other and baby step my way to being in the right frame of mind.

So that, I’ve just decided, is my belated resolution for 2011. Despite the daily grind, despite an increasingly aggrivating society, despite not knowing what the future holds or how I fit in…   I choose to be happy. Not all at once and not naively.

I will be a happier person. Because I can be and because I so choose.

The Christmas spirit is upon me, which naturally means that this is the time of year that I get the most nostalgic and sentimental. Well, slightly more than usual at any rate.

I’m not sure why that’s the case, although it’s probably an emotional holdover from when I was a kid. When Christmas was the alpha and omega of everything that a child waits for all year. Then, Christmas was all about what gifts you could expect. Whether your pile would be bigger than your sister’s. Whether Santa (or later your parents) really were going to get you that GI Joe aircraft carrier, that Nintendo, that bb gun. It was about seeing your cousins and stuffing your face full of turkey (or ham on off years.) But what’s Christmas about now? What does Christmas mean to a 33 year old with no kids who lives a time zone away from those parents, that sister, and those cousins?

To me, the meaning of Christmas isn’t just about Jesus – mostly because I’m still trying to figure out what the meaning of Jesus is. But to 2.1 billion Christians in the world, celebrating the birth of the big JC is about celebrating an age of new hope. It’s that for me too, although it’s also about looking back on the year and reflecting on what’s past and what’s still to come. Christmas is about feeling small and quiet and humble AND it’s about feeling loud and loved and happy. And, if you’re like me, Christmas is a little bit about realizing how very lucky you are and how not everyone gets such a fair shake.

I’m not really very much of a religious person these days, but I do have a little ritual I try to do every Christmas. It involves standing outside under a clear cold night sky and looking up. I try to feel the weight of accumulated history and the massed potential of the ages to come. I think about Jesus; a baby: small, scared, helpless. I wonder if he was real and if so if he was divine. I don’t think a loving god would begrudge me these questions. I wonder if he ever knew how much his teachings would change the world. I think about the good works his followers have done. I think about the horrors they’ve inflicted. And I hope. I hope that the better angels of our nature will prevail. I hope that the Christmas spirit of quiet contemplative love will win out in the end. That’s what I do to give meaning to my Christmas.

And then I go inside. Because it’s warm and loud and people I love are waiting for me. And, despite all my claims, I have monster of a gift pile to attack.