I’m down in southern Illinois at the statewide historic preservation conference which as set up shop at Lewis and Clark Community College. The campus is beautiful and kind of looks like Hogwart’s country cousin. 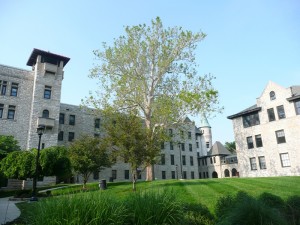 The theme is “Old is the New Green”, which is true and bears continued discussion. But it isn’t the reason why I’m so jazzed that I decided to come.

I attended three great and thought-provoking sessions today and got to get up in front of a crowd of about 200 and share my three (or five. or six.) minute “success story” about what’s been going on at work for the last year. I’ve gotten to meet some great people – some new, some faces to go with names.

One of the sessions I went to discussed how to incorporate New Media into preservation. It really wanted to make me develop this space – or start a new one – in my ongoing campaign to bring context to the people. To do it, I need a platform (easy: wordpress, twitter, tumblr, etc.), a voice (which I continually develop but I think is starting to get its… um.. sea legs? yeah, let’s go with that.), and an audience. This last one is the hardest one for me to wrap my head around. If I build it, will they come? Is it that easy? I’d love to learn more about how to build an audience. A couple of the New Media presenters stressed the importance of variety to keep viewers coming back. I think I’m good with that. I always have a camera for the hey-isn’t-that-cool’s, and as my archives will show, I can rock out a 500 word post like it’s nobody’s business.

Anyway, if you’re into preservation or green stuff or old stuff you should follow the New Media presenters. They’re all on twitter and are: @blisl, @PreservationSTL, @urbanmatt, and @BuildingRevival.

In any case, it’s been a good day, with another in store for tomorrow. Now I’m off to the evening social where, god willing, there will be beer.